There are many things we may want to take into space with us but racism and cultural bias isn't one of them. When the shoe is on the other foot and earthlings become the "aliens" in a foreign land, will we want to be treated the way we have treated those who don't look like us? Join this month's featured speaker, Kim Macharia, Chairman of the Diversity, Equity and Inclusion at the Space Frontier Foundation, and a panel  of experts in equity, social sciences, and health so that there's no space for exclusion. Think tank with Philippine Nurses Association Colorado (PNACO) Vice President Armi Earlam DNP RN, Intel Corporation Vice President of Social Impact and Chief Diversity and Inclusion Officer Dawn Jones, Colorado Bessie Coleman Fly Girls and Fly Boys Take Flight Leadership Aviation founder Jacqueline Withers, CCBN Space Expo creator Ana Cox LPN, and Emmy winning journalist Lori Lizarraga as moderator. Let's use what we discover to promote space for the next generation... together!

Join us and a panel of socioeconomic experts on our mission to introduce students to space as a real possibility!

"The barriers that have been used to keep nurses out of the space program are the same barriers that are used to discourage youth from seeing themselves as an integral part of space reality – especially those in marginalized communities. CCBN Space Talks aims to change that!"

The fourth CCBN Space Talks session skyrockets the mission to promote space for the next generation on Tuesday, June 29, 2021 from 5pm – 6:30pm MT. Stick around for a networking opportunity from 6:30 pm - 7:00 pm MT. 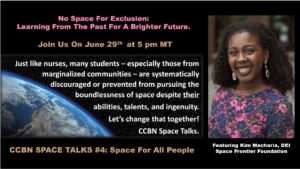 The CCBN Space Talks are a series of action oriented and solution-based conversations that will explore breaking barriers in space discovery for the next generation, and are hosted by the Colorado Council of Black Nurses Inc (CCBN) in a virtual environment.

Tuesday, June 29th is the fourth in a 6-talk series, taking place every last Tuesday of the month from March – August, culminating with the September launch of the Space Expo! A 5-day virtual assembly focusing on physical and applied sciences for preschool, elementary, middle and high school students, the Space Expo will start September 27, 2021 and culminate on October 1 – the 63rd anniversary of NASA’s opening!

CCBN’s Space Talks and Space Expo is one small step to encourage everyone, however able, to donate or influence the donation of resources so that children can be part of the giant leap for mankind and the greater good. Let’s promote space as a reality for the next generation.